The Black Lunch Table seeks to democratize the writing of contemporary art history by animating discourse among the people living this history.  These roundtable sessions provide both physical space and allotted time for interdisciplinary and intergenerational discussions, bringing together a diversity of community members and fostering candid conversations.  Our primary aim is the production of discursive sites, wherein cultural producers can engage in critical dialogue on topics directly affecting our global community.

At the Artists Table, our founding initiative, we curate cultural producers of the African Diaspora into roundtable discussions.   The provision of space to discuss critical issues strengthens the bonds within our nebulous community and validates shared concerns through exchange.  By generating a dialogue among artists of the African Diaspora, in partnership with institutions of record, we are highlighting contingencies in the artworld already in play.  By involving institutions, artists, art historians, curators, collectors in this dialogue we are creating a piece in which all these actors have both a say and something at stake. Writing the record has become everyone’s charge. 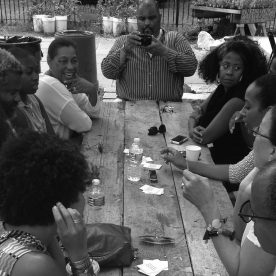 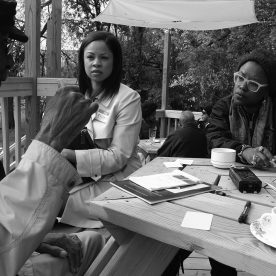 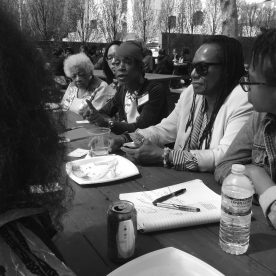 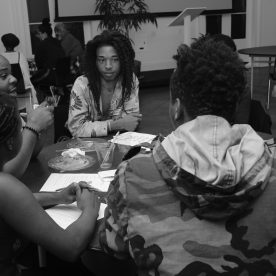 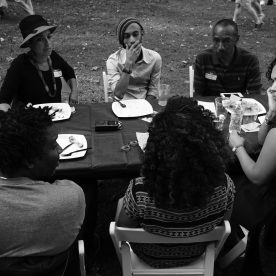 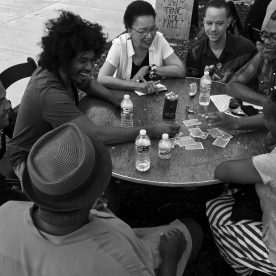 We sit together because we share common backgrounds, face common challenges, and have a vested interest in our communal well-being. We also gather because there is an expectation of separation, both internally and externally from those excluded from the table, who we perhaps have also felt excluded by. As conspicuously othered people, both founding artists have participated in the black lunch table phenomenon at various times in our lives and self-consciously chose to sit or not to sit with our like-skinned classmates or colleagues. In the art world and in other professional and academic circles, such self-segregating exists in varying degrees of external visibility, and with varying degrees of endorsement from its constituents. The Black Lunch Table, taking the lunchroom phenomenon as its starting point, seeks to reify the visibility of connections and conversations that exist between contemporary artists of color.